Tired of the ordinary? For exceptional entertainment to compliment your special day, book one of Cape Town’s top electric string acts.

Specializing in female performers we offer electric violin, electric cello or solo saxophone for breathtaking wedding music that will, quite simply, wow your guests.

South Africa’s leading electric cellist, Carol Thorns has been performing locally and internationally for over a decade.  Armed with her striking red cello, she has won fans in India, Dubai and the UK where she was awarded a 4-star rating for her show ‘Red Cello Electrified’  at the Edinburgh Fringe, the largest arts festival in the world. Carol received a South African Music Award nomination for Best Instrumental Album 2010.

'Thorns has immense talent’ - The Star

Judy Brown is one of the country’s most sought-after saxophonists and has pushed musical boundaries with her debut album, Liquid Sax.   This dynamic performer is well-known for her role in the popular Afro-fusion band, CODA (www.codamusic.co.za), and has become a house-hold name due to her featured performances in Barnyard Theatres around SA.

We also offer the option of solo electric violin – a striking, cutting-edge performance brings new life to this instrument and genre.

Where to find Red Cello

There are currently no reviews for Red Cello.
Have a comment regarding Red Cello? Submit a review using the form above.

OTHER MUSICIANS IN WESTERN CAPE: 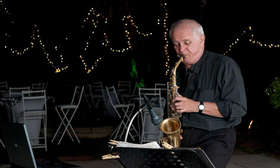 Sign up and receive the latest tips, specials and more to your inbox.